Where We Stand with Covid-19 — December 4

This report will take around 14 minutes to read. During that time, 20 American lives will have been lost to Covid-19.

Americans are dying who didn’t need to be.

Welcome back to Week 34 in my weekly reports analyzing the Covid-19 pandemic and its effects on the country and higher education. For those of you reading this on my blog, Off the Silk Road, I have also launched a newsletter, where these reports can be sent directly to your email each week. Click here to subscribe.

Last week, we looked at the country’s possible paths coming out of the Thanksgiving holiday. This week, we will analyze the alarming trends as hospitalizations and deaths are rising and at record highs.

“The pandemic nightmare scenario—the buckling of hospital and health-care systems nationwide—has arrived.…Hospitals are becoming overwhelmed, causing them to restrict whom they admit and leading more Americans to needlessly die.”

This is an excerpt from The Atlantic’s piece on America’s record-high hospitalizations — over 101,000 Americans are currently hospitalized for Covid-19. 1 in every 5 people in America’s hospitals is hospitalized for Covid-19 — never before has one ailment affected such a large proportion of the hospitalized population. While hospitals may be able to add extra beds, staff are contracting this disease and are unable to take care of patients. Dr. Ashish Jha at the Brown University School of Public Health noted that the proportion of cases being hospitalized is falling. This is likely because in order to triage, the bar for admission into hospitals has been set higher. As a result, Americans are likely dying of COVID-19 either at home or in the hospital because they are unable to seek adequate care at full hospitals. The American Ambulance Association said this week that America’s 911 system is at a breaking point.

Overflowing hospitals do not just impact Covid-19 patients. This means that people may die of strokes, heart attacks or other causes at home. While in the spring hospitals could easily shift personnel between different parts of the country, healthcare workers being needed everywhere makes it impossible to do so now. This week, the Institute for Health Metrics and Evaluation at the University of Washington said that Covid-19 was the leading cause of death in the U.S. this week, surpassing heart disease.

Yes, the vaccine is coming. Yes, a new president is coming. But it won’t be enough. This week, CDC director Dr. Robert Redfield said the next few months of the Covid-19 pandemic will be among “the most difficult in the public health history of this nation.” Perpetuating a raging pandemic when a vaccine is on the way is like having a house that’s on fire with the fire trucks on the way, but you decide to light another match anyway. Public health strategies such as contact tracing are failing to keep up with ever-rising cases, which have now topped 200,000 multiple days this week and will continue to rise after we fully feel the effects of the Thanksgiving surge. Deaths are now starting to follow the trajectory of the 1918 flu pandemic. Those who may have been infected from Thanksgiving are only starting to feel sick now, and many will check into hospitals and sadly will never return home. This all comes as a new Pew poll reports that more than half of Americans know someone personally who has been hospitalized or died from Covid-19. Infectious disease specialist Dr. Jeremy Faust notes that “as of November 28th, there have been more deaths among Americans *age 40 and under* directly attributed to Covid-19 (4,674) than died as a result of the entire Iraq War (4,424).” This week, an American died from Covid-19 every 43 seconds. (CNN’s Christi Paul held 43 seconds of silence on New Day on Saturday.) Those who watch the Johns Hopkins coronavirus dashboard know the cycle: the deaths reset in the morning, are counted through the day and will only stop at midnight. By then, the death toll reaches a large portion of those who have died during 9/11. It is only a matter of days until the daily death toll will likely exceed 3,000. Hospitals have been lining up iPads for the sick to say goodbye to their loved ones.

This week, the CDC issued a report to all Americans with 10 basic health strategies (this list is adapted from Dr. Craig Spencer’s Twitter thread):

It is up to all of us to follow these strategies, and here’s why. The latest IHME modeling shows that even if rapid rollout of a vaccine is accomplished (blue line), the most effective way of lowering the daily death count is with universal masking, as mass vaccination results may not be felt until March or April. Although a vaccine rollout at the projected pace will have some effect, possibly preventing 11,000 deaths, wearing a mask is expected to save 66,000 lives by April 1. Think of a vaccine as a weak bicycle brake: it will slow the pandemic but will not stop it when a runaway train is going off a cliff.

The U.S. has recorded over 1 million cases in the first five days of December alone. There were more Covid-19 cases in the U.S. in the month of November alone than January through June combined. It’s not a rural or urban problem anymore; it’s an American problem, fueled by incompetent leadership and a defiance by a significant portion of the population who “refuse to wear a piece of cloth on their face to protect one another,” as state in the obituary for Dr. Marvin J. Farr written by his son.

We can control this pandemic without a vaccine; other countries in Europe have done so, despite fall surges. America has chosen the path that will involve mass deaths over the next few months, even as many Americans will continue to travel over the holiday season. Yes, for the betterment of human lives Dr. Scott Atlas has left the White House. He leaves behind a legacy of the deliberate killing of thousands of American lives. The president, however, has worked harder to destroy our democracy and overturn the results of a free and fair election than to save American lives.

It is not just a federal issue; it is a failure of states to communicate accurate public health information to their residents. An analysis I conducted earlier in the week shows that only 13 states only held one Covid-19 press briefing for the whole month of November and one state (Florida) held none. Many of the states that have been hit the hardest throughout the month, such as the Dakotas and Wyoming, have held incredibly few briefings. The mean number of briefings in November Democratic governors held was 5.04, while that same figure for Republican governors was 3.27.

We have not yet begun to feel the effects of the Thanksgiving surge. An NPR analysis shows that while many Americans did stay home, 13% still traveled a significant distance.

We are approaching the winter with a baseline that is too high for our healthcare system to handle, and despite highly efficacious vaccines being just around the corner, it is likely that cases will continue to increase. We simply do not know when this peak will occur.

Less than 1% of America’s population lives in long-term care facilities, but as of December 3, 2020, this tiny fraction of the country accounts for 39% of US Covid-19 deaths, according to the COVID Tracking Project. America has failed its elderly generation as the virus now continues to ravage through nursing homes. A state-by-state approach will no longer work as some states are quicker to react and impose stay-at-home orders than others. It’s not a question of lockdown vs. “freedom.” It’s an issue of saving American lives, and through targeted individual and community health approaches, we can attempt to mitigate some of the damage the coming weeks will bring.

Each Friday, I update the College Watchlist, which is currently tracking 156,013 total cases at 96 colleges across the country. At the top of my list of cases in the last 7 days are:

Many schools reported far fewer cases since most students are currently not on campus. However, for those that did report, some reported increases post-Thanksgiving (mean cases increased). There were 4,050 cases in the last 7 days among these colleges.

We are still in the process of analyzing strategies from the fall and I will update you on this research when it is published. However, in the meantime, The Chronicle of Higher Education’s Francie Diep offers five lessons about coronavirus on campus.

Based on case studies from college campuses this fall, the National Academies of Sciences, Engineering, and Medicine issued best practices for testing and behavior strategies on college campuses. A quick summary of both documents is below.

As colleges prepare for the spring, we must continue to learn from the fall. We also must note that many of the elements colleges may have taken for granted in their reopening plans this fall will not work for the spring due to extremely high levels of community transmission nationwide that are likely to persist into January.

Let’s roll the clips of the good stuff. In my usual tradition, I feature my favorite stories from the week. Here are my Top 14.

When President Donald Trump first addressed the nation as president on January 20, 2017 and swore to “preserve, protect and defend the Constitution of the United States,” he declared “this American carnage stops right here and stops right now.” Now, that same president is witnessing American carnage at an unprecedented scale and continues to spread disinformation and do absolutely nothing to stop it. America is running out of time to turn its trajectory around. More Americans are dying from Covid-19 than at any point in the pandemic. Although the first doses of a vaccine are expected to be delivered in under 10 days, widespread vaccination will not occur for months and many will die while waiting in line. There is a definite end to this pandemic; it is up to all of us to muster all our strength to save our healthcare workers and our fellow Americans’ lives. Deaths at a massive scale will most likely continue for the next few weeks, though our actions now can pave the way for a brighter future.

Another comprehensive and very well sourced round up. The detail and data in the vaccine tracker is very impressive.

Keep up the great work. I am able to navigate the complexity of our moment better
with the factual undergirding curated by dedicated folks like you. 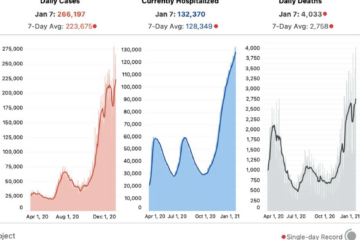 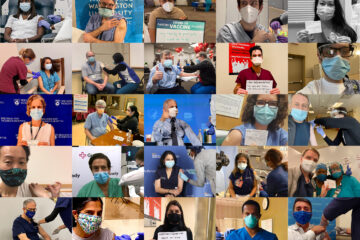 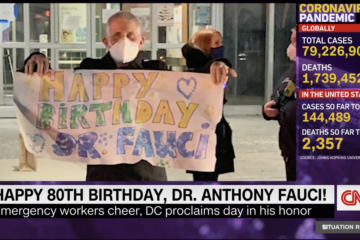